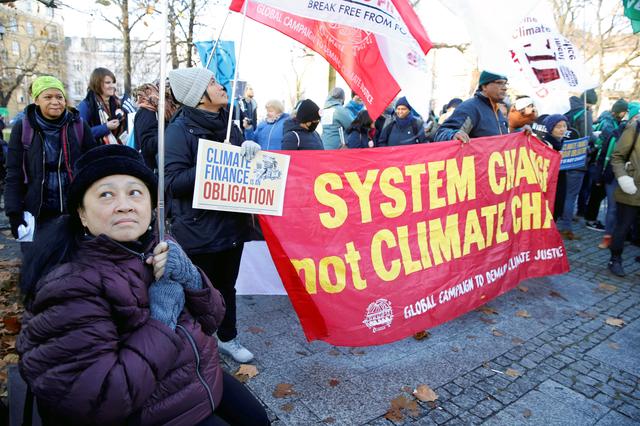 1/3
Protesters take part in the March for the Climate on the streets of Katowice, where the COP24 UN Climate Change Conference 2018 is held, Poland December 8, 2018. Agencja Gazeta/Grzegorz Celejewski via
Reuters + 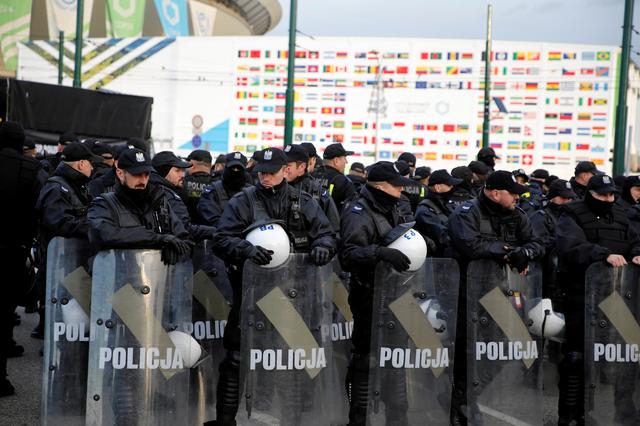 2/3
Policeman secure the venue, where the COP24 UN Climate Change Conference 2018 is held, during the March for the Climate on the streets of Katowice, Poland December 8, 2018. Agencja Gazeta/Grzegorz Celejewski via
Reuters + 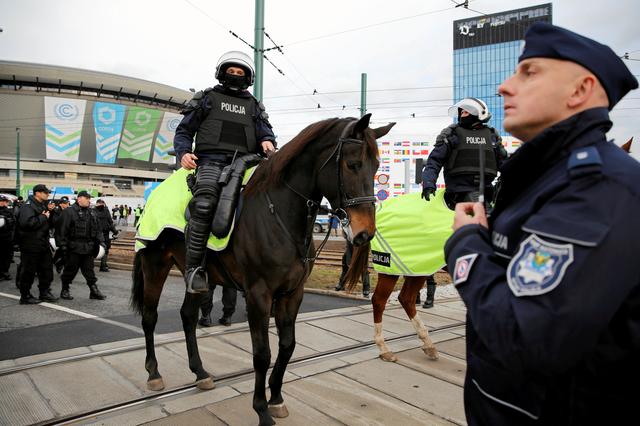 3/3
Policeman secure the venue, where the COP24 UN Climate Change Conference 2018 is held, during the March for the Climate on the streets of Katowice, Poland December 8, 2018. Agencja Gazeta/Grzegorz Celejewski via
Reuters +

KATOWICE, Poland Talks billed as the most important U.N. conference since the Paris 2015 deal on climate change are nearing the end of a first week in the Polish city of Katowice, the capital of the country's Silesian coal mining district.

The aim of the gathering is to meet an end-of-year deadline for agreeing a rule book on how to enforce action to limit further warming of the planet.

Below is a flavor of the mood around the event, held in a sprawl of temporary passageways and meeting rooms next to the "Spodek", a flying-saucer-shaped sports and concert venue.

Negotiations continue to clean up a messy text ahead of a Saturday night deadline to have a document ready for ministers to wrestle over in the second and final week of the conference.

Negotiators say there has been progress, but it is slow and, as ever, finance is a stumbling block.

Although highly technical, negotiators say the Katowice talks are an essential follow-up to the Paris Agreement, which agreed on the aim of limiting global warming but did not provide rules on how to achieve that.

A U.N. spokesman said a record number -- more than 32,800 -- had registered to attend the conference.

Those arriving at the start of next week will include former Maldives President Mohamed Nasheed, who will be returning from exile in Britain to lead his country's delegation.

At noon, demonstrators, accompanied by a heavy police presence, took to the streets of Katowice to demand an agreement that will prevent temperatures rising by more than 1.5 degrees Celsius.

The marchers' symbol is an alarm clock, as organizers seek to wake governments up to the urgency of action.

"Our message for the politicians and the companies is that they should stop making money at our expense, at the expense of our health," said one of the demonstrators, who gave his name only as Jeremi.

"They shouldn't just think about the next 10 years, but see that it's possible to live on our planet for much longer," he said.

A police spokesman estimated that 3,000 people took part in the march.

Environmental campaigners in Katowice said violent protests by "yellow vest" demonstrators in Paris about fuel costs were about social justice and should not be confused with the need for a price on carbon to help shift the energy mix away from fossil fuel.

French President Emmanuel Macron was forced to scrap a planned fuel tax because of the angry demonstrations about living costs.

HELD AT THE BORDER

Numbers on the streets of Katowice could have been reduced by at least a dozen after Polish border guards refused to let some environmental campaigners enter the country, non-governmental organizations said.

One of those stopped was Nugzar Kokhreidze, a delegate from Georgia.

"I was stopped at the passport control at Katowice International Airport. They said that my name and surname is in the banned list in some system," he said in an email.

Environment organization 350.org said in an email that those denied entrance had been told they were "a threat to national security, which as you can imagine is ludicrous".

A spokeswoman for the Polish border guard said 161 people had been forbidden entry to Poland on Friday for many reasons, including a lack of correct documents and being on security lists. She could not immediately say whether there was any connection to the climate talks in Katowice.

Since the beginning of this year, Poland has denied entry to 74,000 people.

(Reporting by Barbara Lewis, Anna Koper and Sebastien Malo from the Reuters Foundation; Editing by Alexander Smith and Helen Popper)