Photos of the week 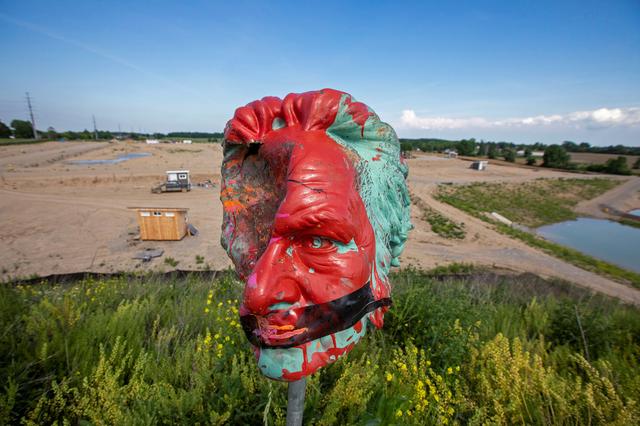 The head from a statue of Egerton Ryerson, considered one of the architects of Canada's residential school system, is seen after its removal from Ryerson University, at 1492 Land Back Lane reclamation camp set up by Six Nations of the Grand River in Caledonia, Ontario, Canada June 9, 2021. The experiences of indigenous children, forcibly separated from their families under a government policy later described as cultural genocide, are back in the spotlight after a radar survey uncovered evidence of the remains of 215 children buried in unmarked areas on the grounds of a Western Canadian residential school last month. REUTERS/Carlos Osorio 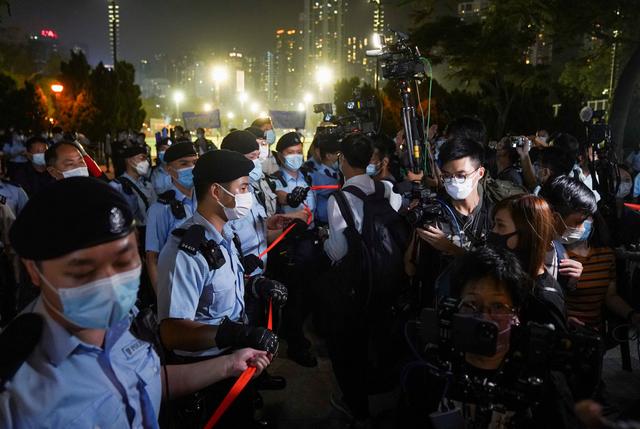 People look at police officers standing guard at Victoria Park on the 32nd anniversary of the Tiananmen Square crackdown, in Hong Kong, June 4, 2021. Police blocked off the park to prevent people gathering to commemorate the 1989 Tiananmen Square crackdown and arrested the planned vigil's organizer. The ban on the vigil came amid growing concern in the pro-democracy movement and internationally about the suppression of the semi-autonomous city's traditional freedoms, notably a national security law imposed by Beijing last year. REUTERS/Lam Yik 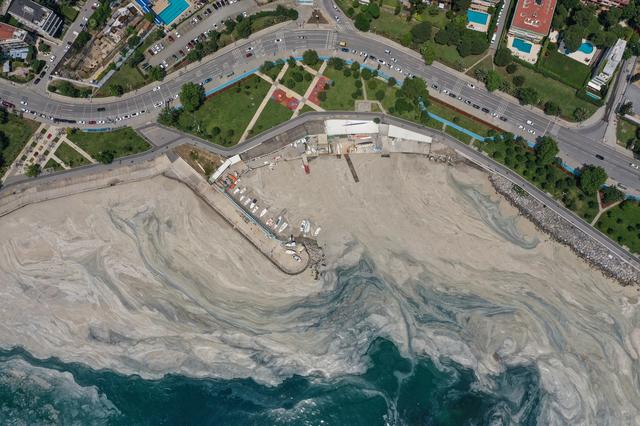 'Sea snot', a thick slimy layer of the organic matter known as marine mucilage, spreads through the Sea of Marmara, on the shores of Istanbul, Turkey June 7, 2021. The mucilage has covered harbors, shorelines and swathes of the surface, posing a threat to marine life and the fishing industry. Some has sunk below the waves, suffocating seabed life. REUTERS/Umit Bektas 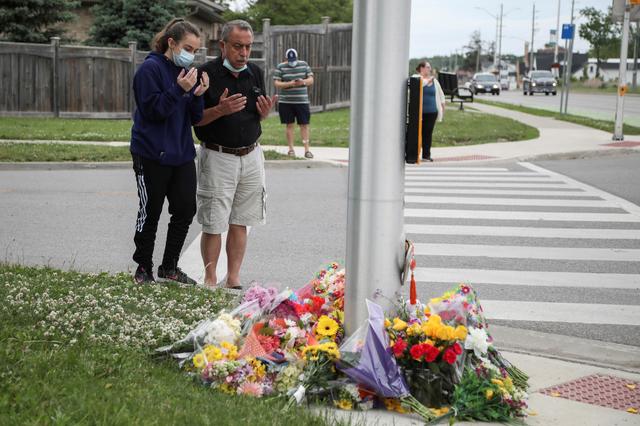 Abdullah Alzureiqi and his daughter Hala say a prayer at the crime scene where a driver ran over a Muslim family in what police say was a deliberately targeted anti-Islamic hate crime, in London, Ontario, Canada June 7, 2021. Four members of the family were killed as they were out on an evening walk near their home, when police say a man rammed them with his pickup truck, targeting them because of their religion. The victims were Salman Afzaal, 46; his wife, Madiha Salman, 44; their 15-year-old daughter, Yumna Afzaal; and Afzaal's 74-year-old mother Talat Afzaal. Their 9-year-old son, Fayez Afzaal, remained hospitalized with serious but non-life-threatening injuries in stable condition. REUTERS/Carlos Osorio 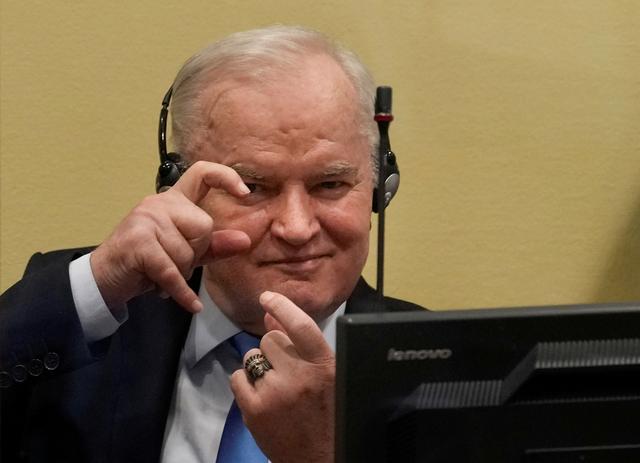 Former Bosnian Serb military leader Ratko Mladic gestures before war crimes judges upheld his genocide conviction and life sentence at the UN International Residual Mechanism for Criminal Tribunals (IRMCT) in The Hague, Netherlands June 8, 2021. Mladic, 78, was convicted in 2017 on charges of genocide, crimes against humanity and war crimes including terrorizing the civilian population of the Bosnian capital Sarajevo during a 43-month siege, and the killing of more than 8,000 Muslim men and boys taken prisoner in the eastern town of Srebrenica in 1995. Peter Dejong/Pool via REUTERS 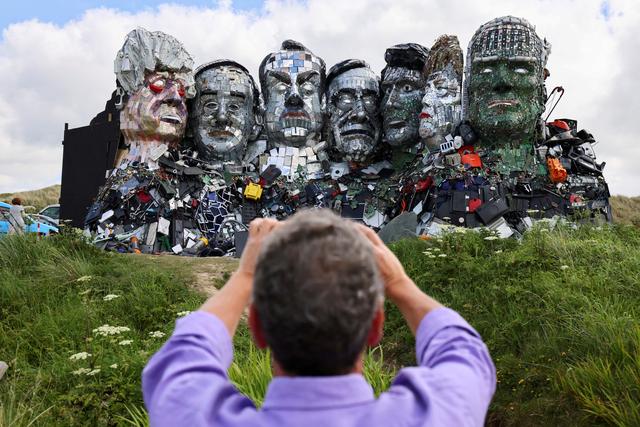 A man photographs "Mount Recyclemore", a sculpture depicting the G7 leaders looking towards Carbis Bay, made from electronic waste by Joe Rush and Alex Wreckage, ahead of the G7 summit at Hayle Towans in Cornwall, Britain, June 8, 2021. REUTERS/Tom Nicholson 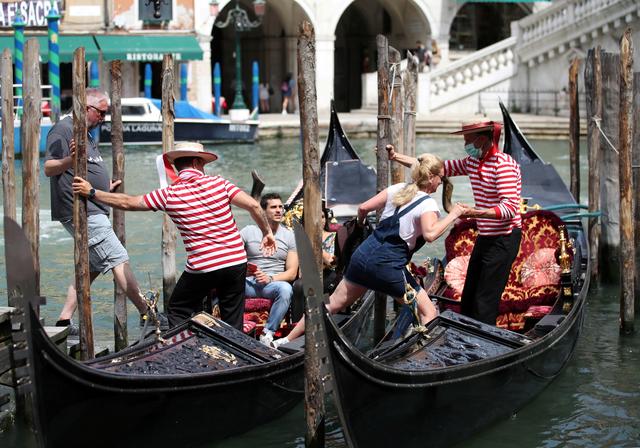 Gondoliers help tourists to board gondolas, as the region of Veneto becomes a "white zone", following a relaxation of COVID-19 restrictions with only masks and social distancing required, in Venice, Italy, June 7, 2021. REUTERS/Yara Nardi 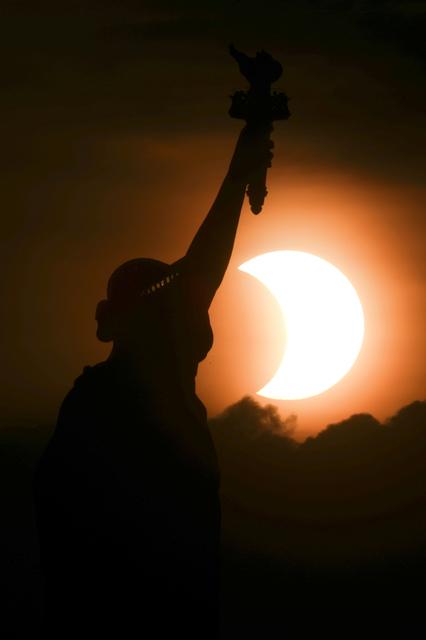 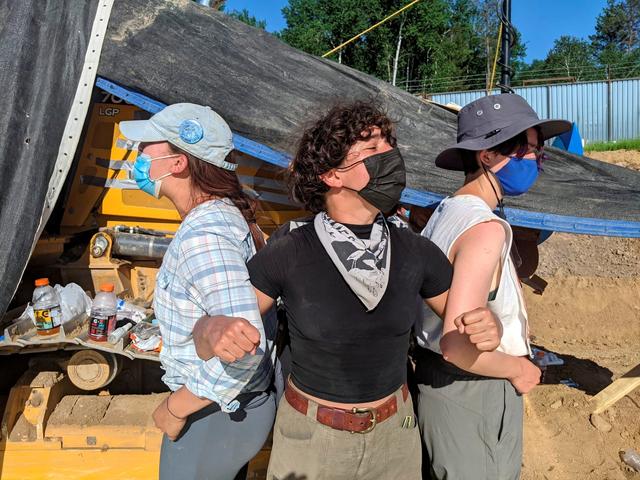 Demonstrators lock themselves to Enbridge equipment during a protest against the Line 3 pipeline at a pumping station in Hubbard County, Minnesota, June 7, 2021. Line 3, which entered service in 1968, ships crude from Alberta, Canada, to U.S. Midwest refiners, and carries less oil than it was designed for due to age and corrosion. Owner Enbridge is replacing the pipeline so it can roughly double the amount of crude it transports. The pipeline is key to landlocked Alberta's efforts to boost crude exports from its oil sands. Pipeline opponents say they stand in solidarity with indigenous communities concerned about the risks the line poses to their rivers and lakes. REUTERS/Nicholas Pfosi 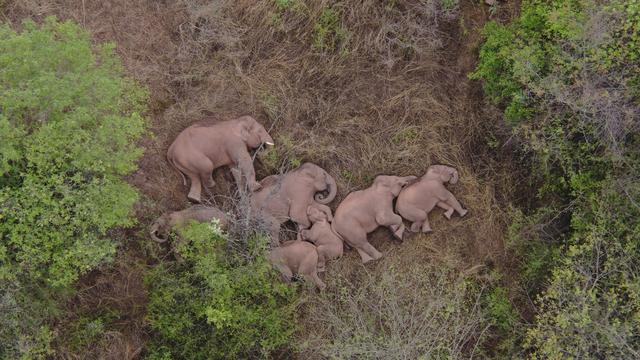 Wild Asian elephants lie on the ground and rest in Jinning district of Kunming, Yunnan province, China, June 7, 2021. A herd of 15 wild elephants has trekked hundreds of kilometres after leaving their forest habitat in Xishuangbanna National Nature Reserve, according to local media. China Daily via REUTERS 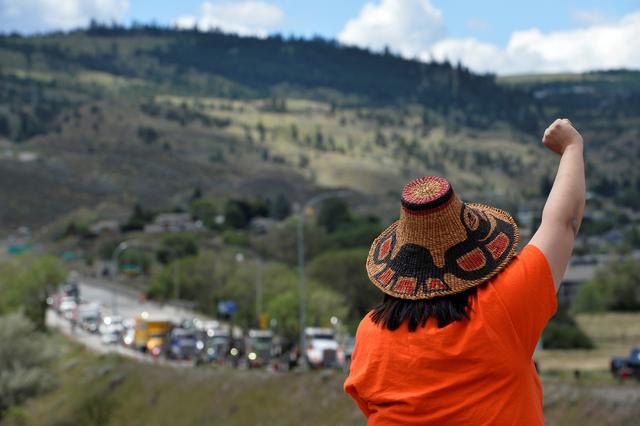 A convoy of trucks arrives at the site of the former Kamloops Indian Residential School, in support of the community after the remains of 215 children, some as young as three years old, were found at the site in Kamloops, British Columbia, Canada June 5, 2021. REUTERS/Jennifer Gauthier 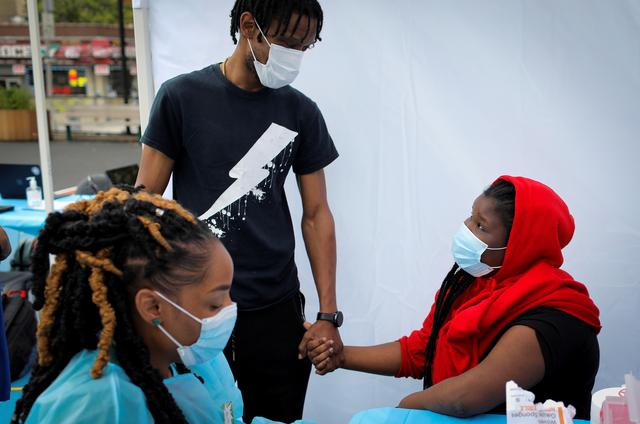 14-year-old Aniyah Jennings holds hands with her father Jarmal Samuels, just before receiving a dose of the Pfizer-BioNTech coronavirus vaccine during a vaccination event for local adolescents and adults outside the Bronx Writing Academy school in the Bronx, New York City, June 4, 2021. REUTERS/Mike Segar 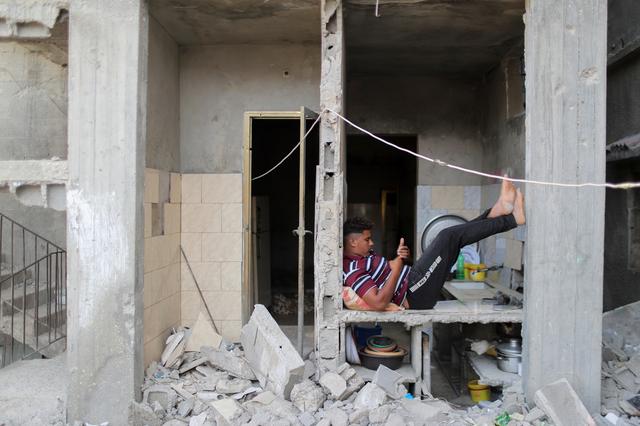 A Palestinian uses his phone as he sits amid the rubble of a house that was destroyed in Israeli air strikes during Israeli-Palestinian fighting, in Gaza June 9, 2021. REUTERS/Mohammed Salem 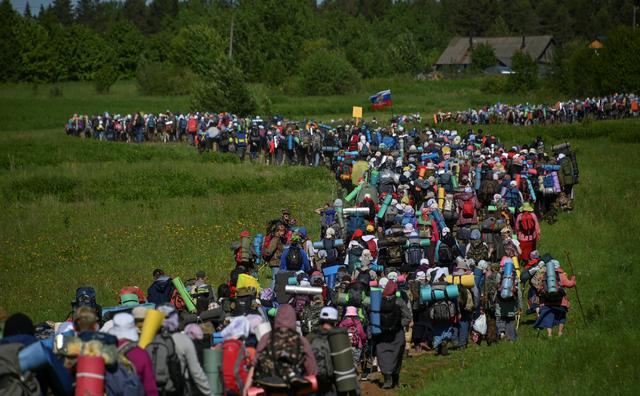 Orthodox believers go on pilgrimage celebrating the icon of St. Nicholas in Kirov Region, Russia June 4, 2021. At least 17,000 pilgrims, loaded with backpacks and some of them barefoot, took part in a five-day and 150-kilometer-long journey from Kirov to the village of Velikoretskoye, according to the local media. REUTERS/Alexey Malgavko 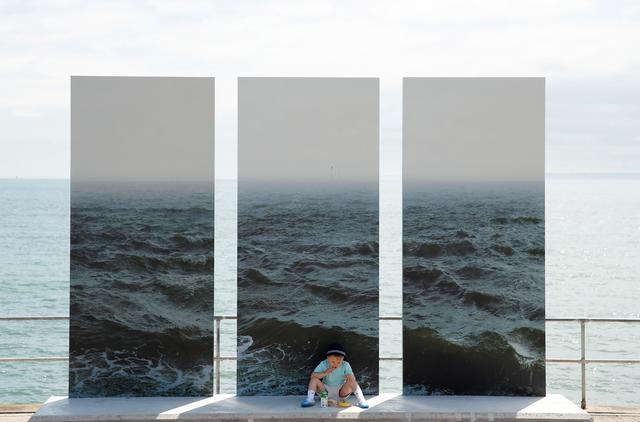 Marshall, 3, sits and eats his lunch in front of a piece of artwork entitled "In The End Is The Beginning" by Nadav Kander during the Estuary 2021 Festival in Shoeburyness, Britain June 10, 2021. REUTERS/Andy Couldridge 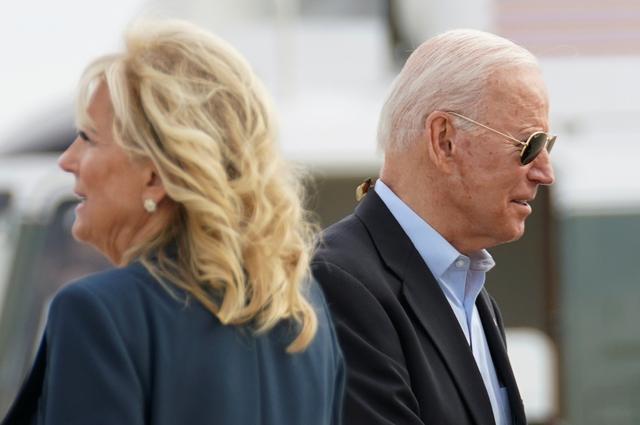 A cicada sits on the neck of President Joe Biden as he and first lady Jill Biden depart for England from Joint Base Andrews in Maryland, June 9, 2021. REUTERS/Kevin Lamarque 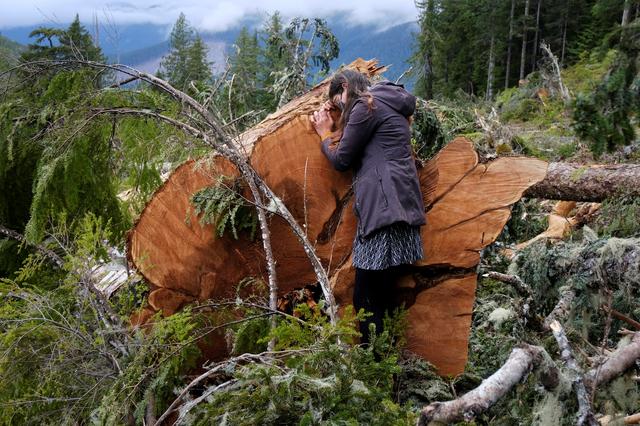 A woman, who was among activists trying to stop the logging of old growth timber, embraces the stump of a large tree in a cut block of Tree Farm licence 46 near Port Renfrew, British Columbia, Canada May 17, 2021. The province agreed to a request from indigenous groups to defer logging of old-growth trees in the Fairy Creek watershed for two years. Activists have been blocking roads to stop private logging company Teal Jones from harvesting old-growth trees since last August, and there have been more than 180 arrests after police moved in to enforce an injunction last month. REUTERS/Jen Osborne 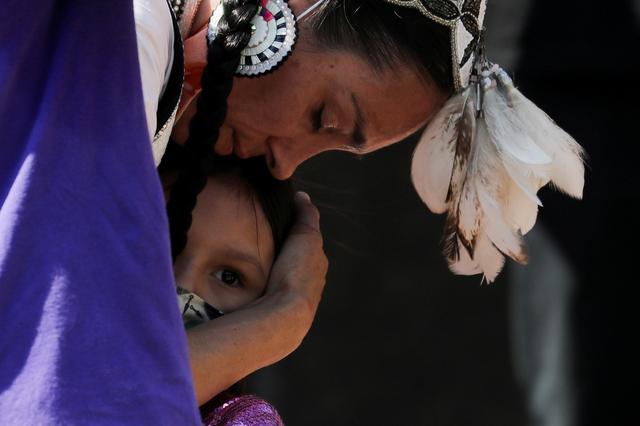 A woman embraces her daughter during a rally after the remains of 215 children were found at an indigenous residential school in British Columbia, in Toronto, Ontario, Canada June 6, 2021. REUTERS/Chris Helgren 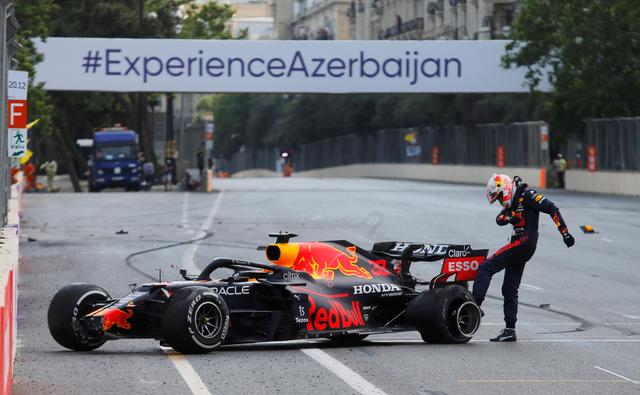 Red Bull's Max Verstappen kicks the wheel of his car after crashing out of the Azerbaijan Grand Prix at Baku City Circuit in Baku, Azerbaijan, June 6, 2021. REUTERS/Anton Vaganov 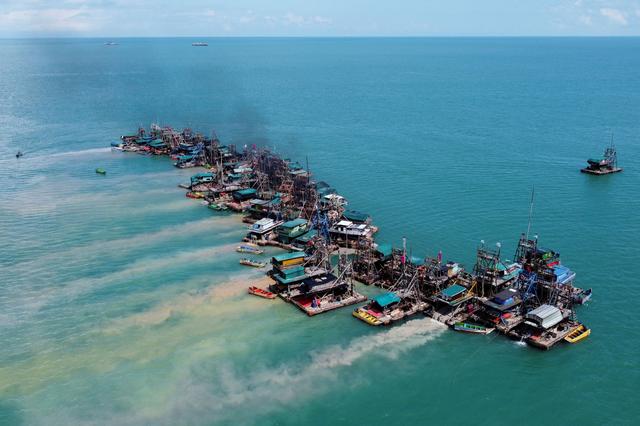 An aerial view shows wooden pontoons equipped to dredge the seabed for deposits of tin ore off the coast of Toboali, on the southern shores of the island of Bangka, Indonesia, May 1, 2021. Indonesia is the world's biggest exporter of tin used in everything from food packaging to electronics and now green technologies. But deposits have been heavily exploited on land, leaving parts of the islands resembling a lunar landscape with vast craters and highly acidic, turquoise lakes. Miners are now turning to the sea. REUTERS/Willy Kurniawan