Top Photos of the Day 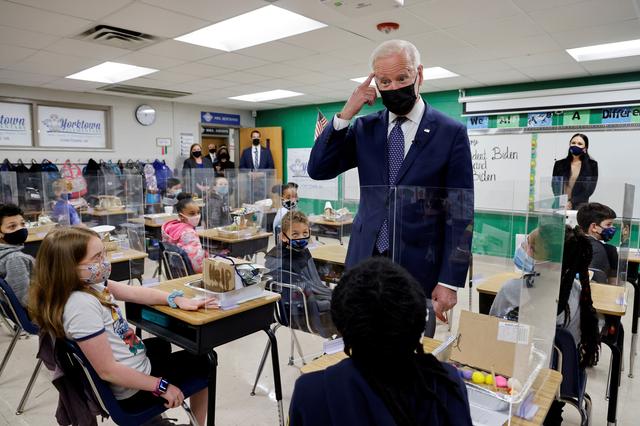 U.S. President Joe Biden gestures in a classroom during a visit at Yorktown Elementary School in Yorktown, Virginia. REUTERS/Jonathan Ernst 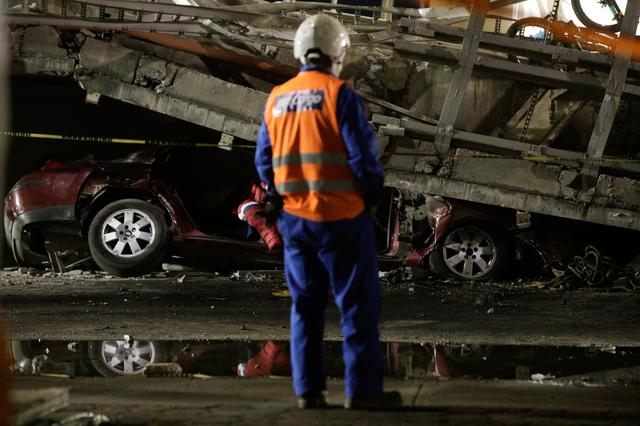 A rescue worker stands in front of a car trapped under an overpass for a metro that partially collapsed with train cars on it at Olivos station in Mexico City. REUTERS/Luis Cortes 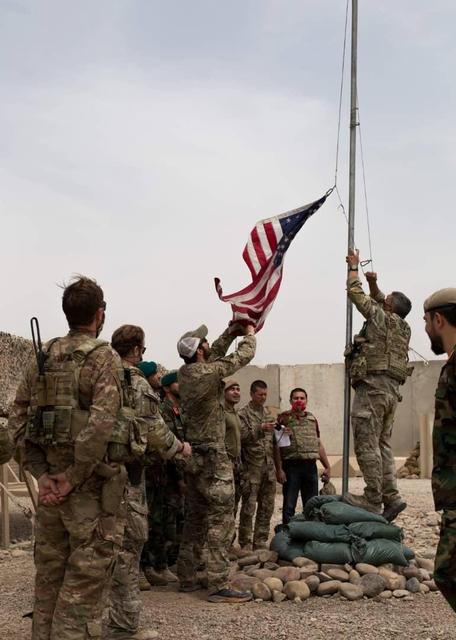 The handover ceremony at Camp Anthonic, from U.S. Army to Afghan Defense Forces, is carried out in Helmand province, Afghanistan. Ministry of Defense Press Office/Handout via REUTERS 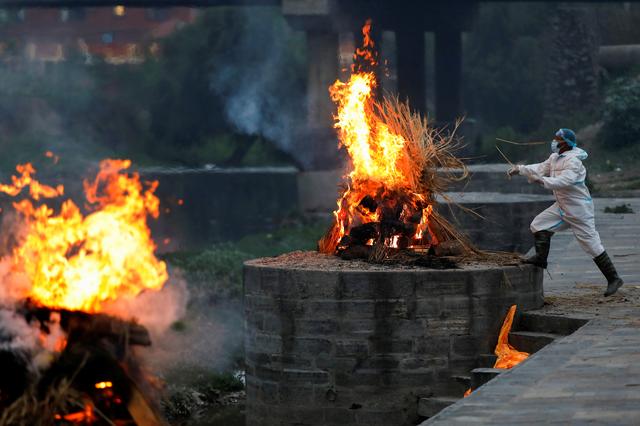 A man wearing personal protective equipment (PPE) cremates a body of a coronavirus victim at the crematory as the country recorded the highest daily increase in deaths since the pandemic began, in Kathmandu, Nepal. REUTERS/Navesh Chitrakar 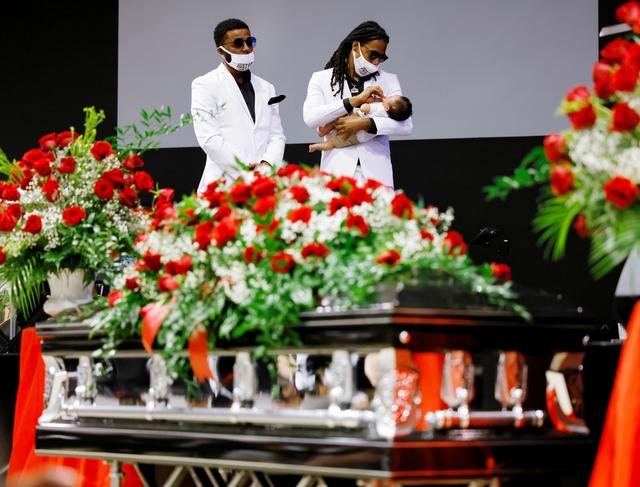 Khalil Ferebee tends to his baby son Karter while standing with his brother Jha'rod Ferebee on a stage behind the coffin of their father Andrew Brown Jr. at the funeral in Elizabeth City, North Carolina. REUTERS/Jonathan Drake 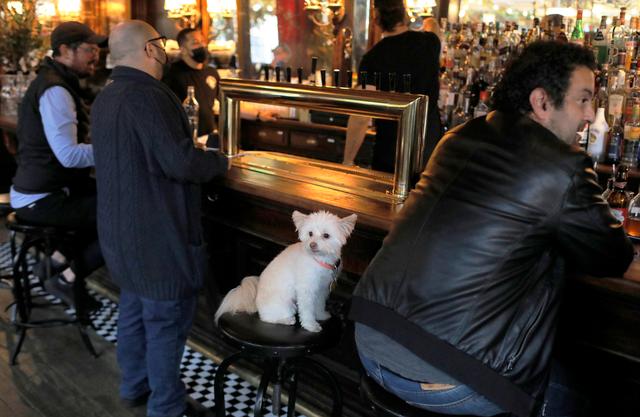 Sally, a Havanese Pomeranian mix aged 5, sits at the bar with her owner Matt Friedlander, 39, of New York City at the White Horse Tavern (est. 1880) as restrictions eased on indoor drinking in bars, allowing seating at the bar, during the outbreak of the coronavirus in Manhattan, New York. REUTERS/Andrew Kelly 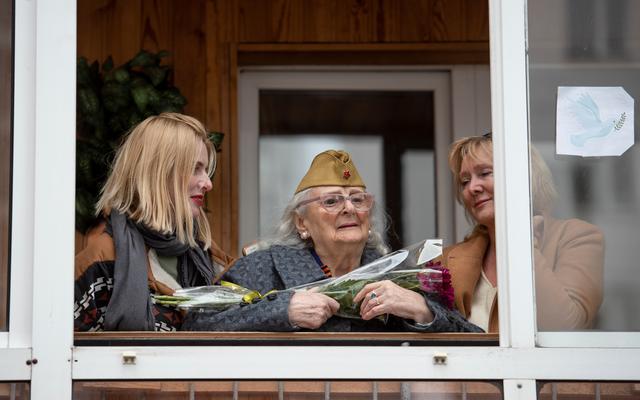 World War Two veteran Valentina Startseva, 96, accompanied by her daughter and granddaughter, watches a concert out of her balcony as she receives congratulations from members of the military-historical society "Krepost" (Fortress) on the upcoming Victory Day, which marks the anniversary of the victory over Nazi Germany, in Tomsk, Russia. REUTERS/Taisiya Vorontsova 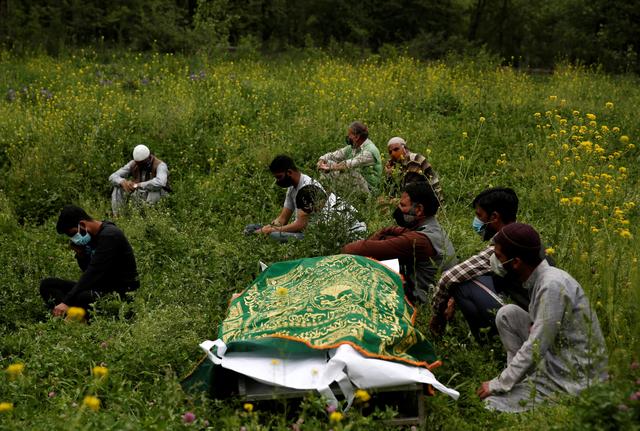 Relatives sit next to the body of a man, who died due to the coronavirus, as they wait for a grave to be prepared for his burial at a graveyard on the outskirts of Srinagar. REUTERS/Danish Ismail 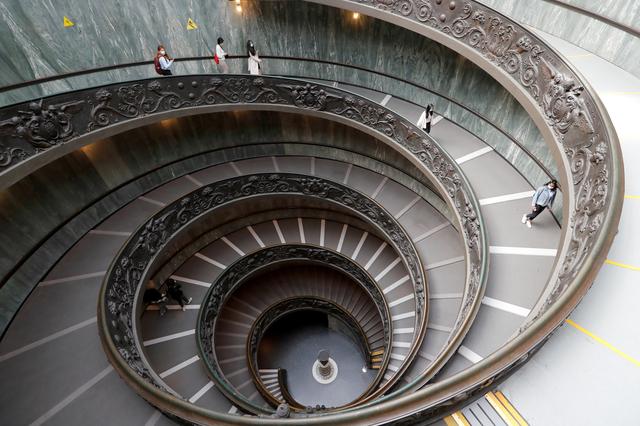 People visit the Vatican Museums on the day of its reopening after weeks of closure, as coronavirus restrictions ease, at the Vatican. REUTERS/Remo Casilli 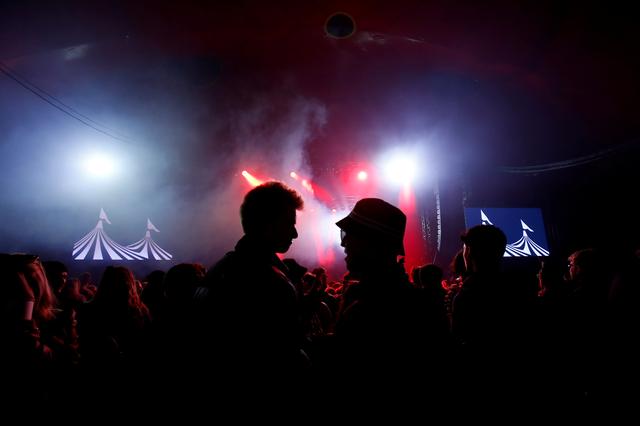 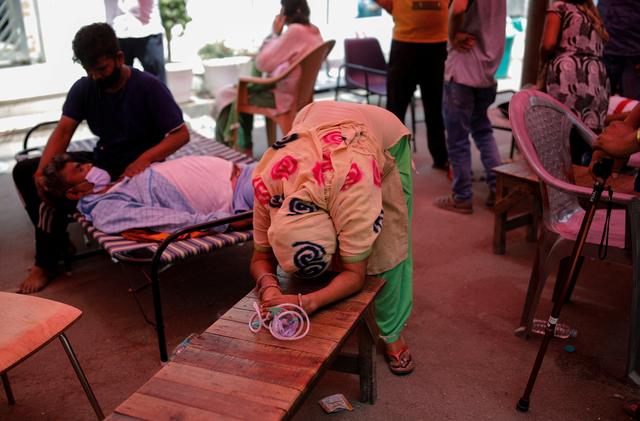 Wife of Nanhe Pal, 52, cries as she pleads for oxygen support for her husband, who is suffering from breathing problem at a Gurudwara (Sikh temple), amidst the spread of coronavirus, in Ghaziabad, India. REUTERS/Adnan Abidi 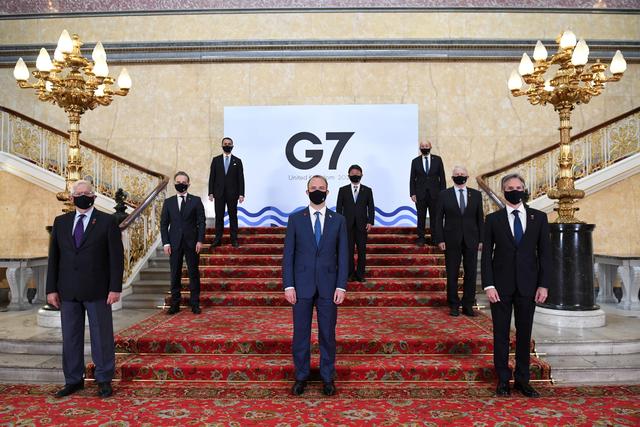 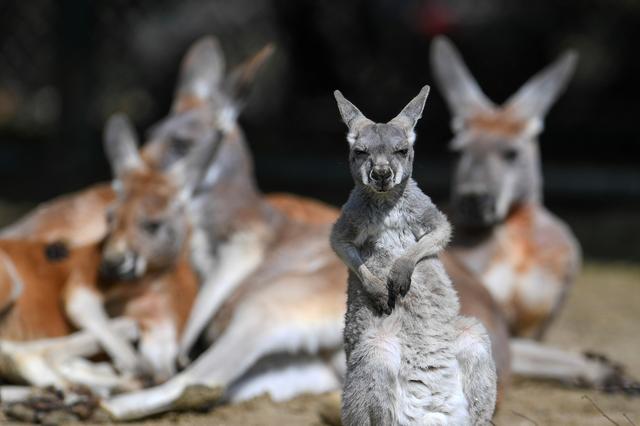 A young red kangaroo looks on at Hellabrunn Zoo after its reopening, while measures to contain the coronavirus are still in place in Munich, Germany. REUTERS/Andreas Gebert 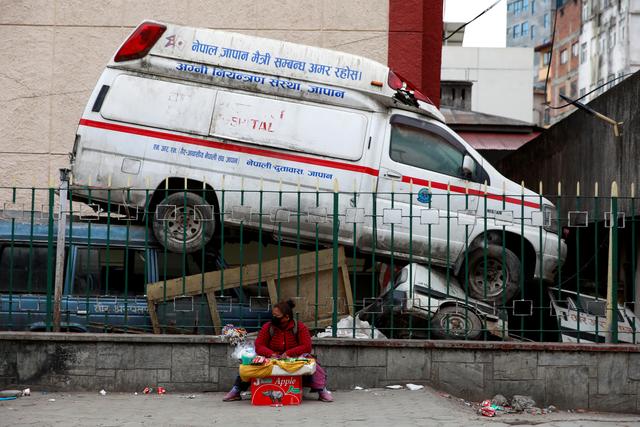 A street vendor sits next to an abandoned ambulance outside the premises of a hospital as the major second coronavirus wave surges in Kathmandu, Nepal. REUTERS/Navesh Chitrakar 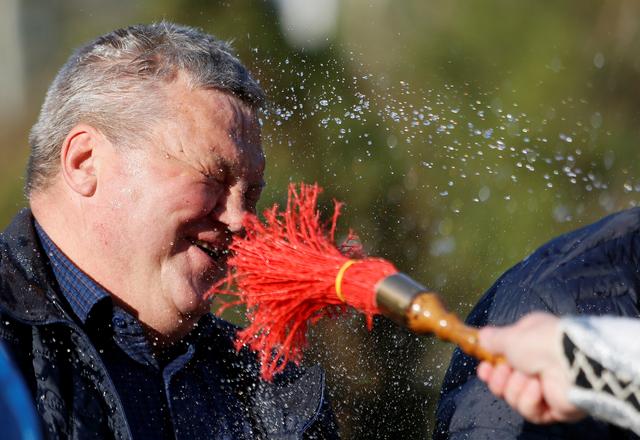 A priest sprinkles holy water on a believer during the Orthodox Easter service in the Holy Transfiguration Cathedral in the rebel-controlled city of Donetsk, Ukraine. REUTERS/Alexander Ermochenko 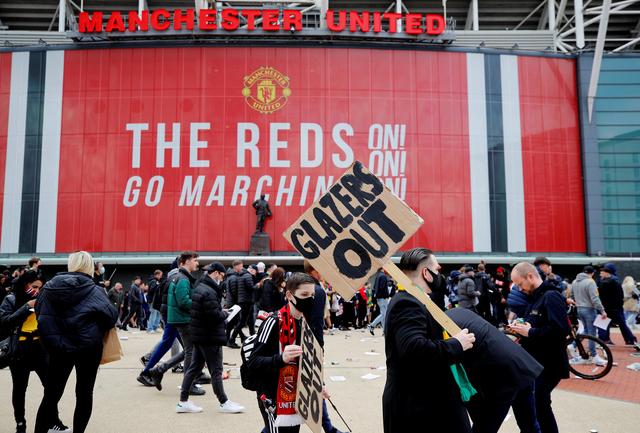 Manchester United fans protest against their owners outside the stadium before the match in Manchester, Britain. REUTERS/Phil Noble 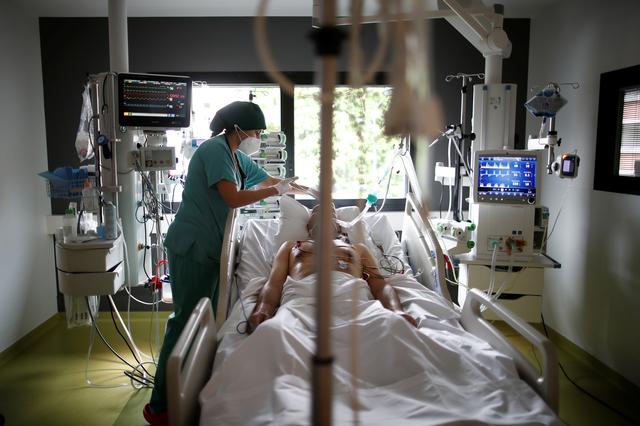 A healthcare worker provides care for a COVID-19 patient in the Intensive Care Unit at the Centre Cardiologique du Nord private hospital in Saint-Denis, near Paris, amid the coronavirus disease pandemic in France. REUTERS/Benoit Tessier 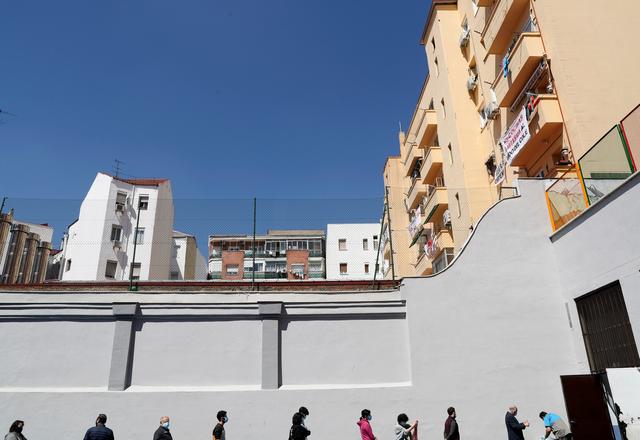 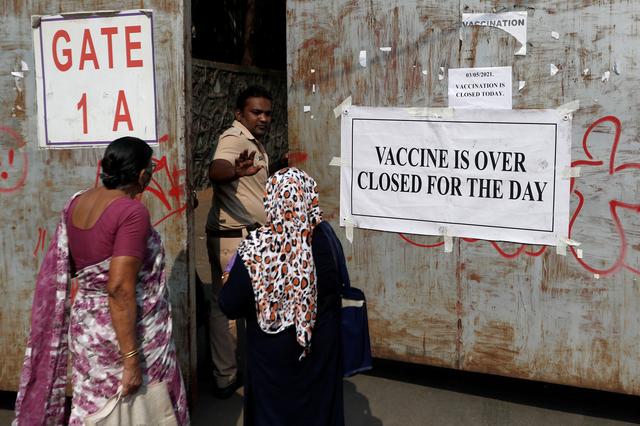 A policeman asks people who came to receive a dose of a coronavirus vaccine to leave as they stand outside the gate of a vaccination centre which was closed due to unavailability of the supply of COVID-19 vaccine, in Mumbai, India. REUTERS/Francis Mascarenhas 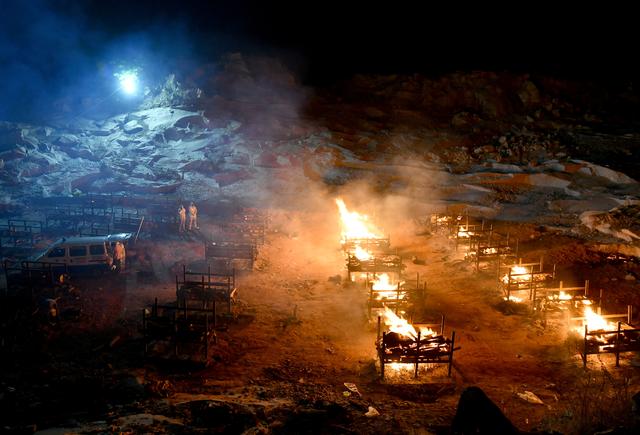 Volunteers stand next to burning pyres of persons who died due to the coronavirus, at a crematorium ground in Giddenahalli village on the outskirts of Bengaluru, India. REUTERS/Samuel Rajkumar 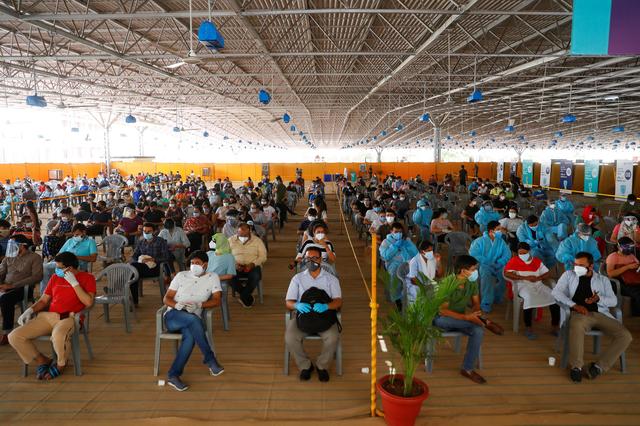 People wearing protective face masks wait to receive a dose of COVISHIELD, a coronavirus vaccine manufactured by Serum Institute of India, at a vaccination center in New Delhi. REUTERS/Adnan Abidi 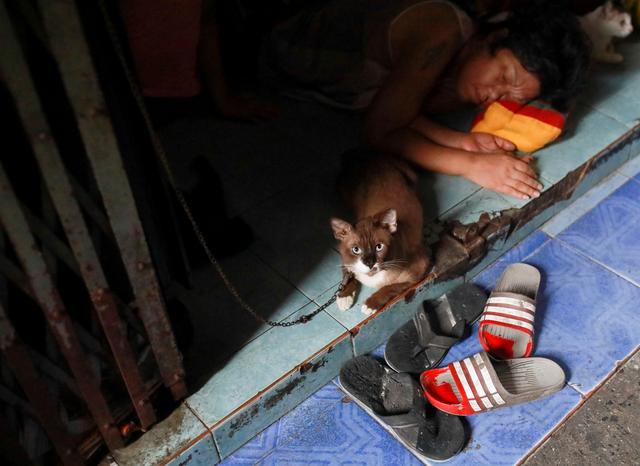 A woman sleeps next to her cats in Klong Toey community in Bangkok, Thailand. REUTERS/Soe Zeya Tun 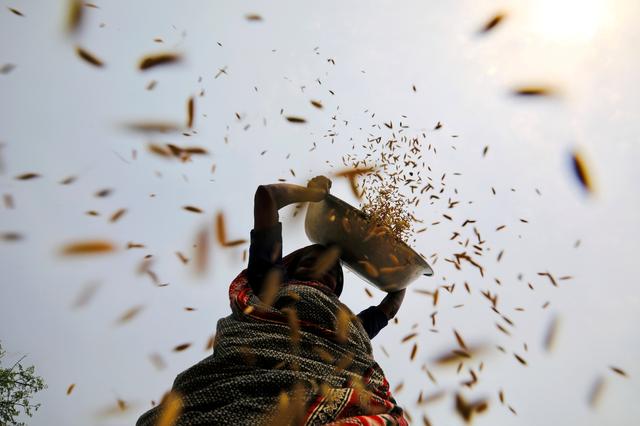 A woman processes paddy rice which she harvested from a field in Birulia, outskirts of Dhaka, Bangladesh. REUTERS/Mohammad Ponir Hossain 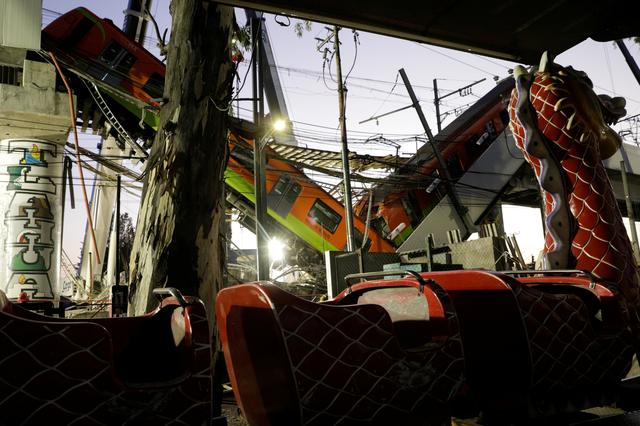 A train is seen at the site where an overpass for a metro partially collapsed at Olivos station in Mexico City. REUTERS/Luis Cortes