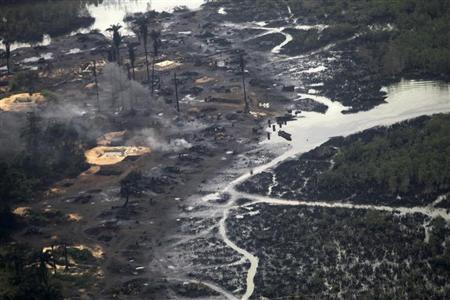 A view of an illegal oil refinery is seen in Ogoniland outside Port Harcourt in Nigeria's Delta region March 24, 2011.
Reuters/Akintunde Akinleye

A statement sent to media from an email address used in the past by the Movement for the Emancipation of the Niger Delta (MEND) warned of attacks on the Italian energy firm ENI, accusing it of working with the Nigerian army.

MEND was the main group behind years of attacks on the oil industry in the Niger Delta, which severely disrupted output in Africa's biggest oil and gas industry until an amnesty was brokered by President Goodluck Jonathan in 2009.

The group claimed responsibility for car bombs near an independence day parade in Abuja last October which killed at least 10 people, but most of its main field commanders accepted the amnesty and there have been no major attacks on oil industry facilities since then.

The group was always highly factionalised and security analysts say it is difficult to know what operational capacity it has left, noting new field commanders could start to emerge.