Analysis - The buyers are back, Canada housing market defies doomsayers 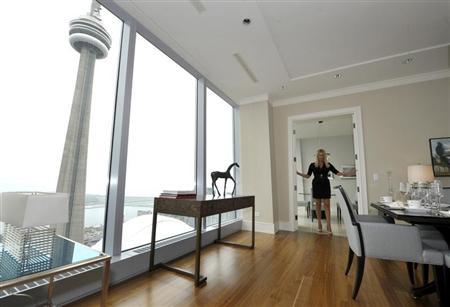 TORONTO Daniel DiManno sold his Toronto house for less than he had hoped and wanted to see if prices would cool before he bought a new one. But Canadian mortgage rates are rising again and that's spurring DiManno and others to jump back into the market, cutting short an already brief housing downturn.

"I saw that they are going to increase rates, so I called my bank last Friday and locked in 2.5 percent for 120 days," said the 31-year-old accountant, starting the clock on a four-month search for a new home before borrowing gets more expensive.

After nearly a year of cooling sales and plenty of concern that Canada could head for a U.S.-style housing crash, demand has roared back in key markets. What's still unclear, however, is whether the recent surge is a reinflation of a real estate bubble, a final rush of buyers before rising rates choke off demand, or just a sign of market resilience.

The rise in mortgage rates comes after North American bond yields jumped on fears that an improving U.S. economy will cause the Federal Reserve wind down its monetary stimulus program, known as quantitative easing, more quickly than expected.

After a long cold spring that dampened house hunting, May sales of existing homes rose 3.6 percent, the biggest monthly gain in almost 2-1/2 years, returning the market almost to where it was before Canada's Conservative government tightened lending rules in mid-2012 to stave off a housing bubble.

Housing starts also jumped much more than expected in the month, adding to evidence that late-spring buyers have breathed life back into a market that some had forecast was heading over a cliff.

Toronto real estate agent Steven Fudge said he was starting to believe the market was back in balance after a cool-down. But the specter of higher rates has brought buyers back, marking either a new phase of a bubble or the last kick of a dying mule, he doesn't know which.

"In the last couple of weeks, there's been a real strong murmur ... anticipating a bump in rates," said Fudge, a sales representative at Bosley Real Estate Brokerage, which operates the Toronto property website urbaneer.com. "It's like fuel on the market. There's now a whole bunch of buyers locking in 60- to 90-day mortgage pre-approval."

"I've been counseling buyers to be cautious," he said. "It really feels like almost anything can happen."

IS IT A BUBBLE?

The question of whether the late-spring surge marks a reinflation of a real estate bubble is hanging over the industry.

The federal housing agency, the Canada Mortgage and Housing Corp, this week revised up its outlook for sales, construction, and price increases in 2013 and 2014, effectively declaring the downturn over.

"The market was moderating in the second half of 2012. Then we've had an inflection point, and went into a moderate positive trend since the beginning of 2013," said Mathieu Laberge, deputy chief economist at CMHC. "We should see this type of trend for housing starts going forward."

The agency, which insures the majority of mortgages Canadian banks issue, expects average national prices to rise 1.6 percent in 2013 and 2.1 percent in 2014, which would be the "soft-landing" policymakers want and a long way from dire predictions of a 10 percent to 25 percent price crash.

"I'd say we feel good. I mean, we're not out of the woods yet, but we feel good," said Brian Hurley, chief executive of Genworth Canada, a unit of Genworth MI Canada Inc and the largest private residential mortgage insurer in Canada.

Hurley acknowledges he was feeling afraid last year when sales dropped and analysts worried that tighter mortgage rules had squeezed too many buyers out of the market.

Prices fell in Vancouver, which had been Canada's hottest market, but national prices gains never slowed below an annual 2 percent.

To be sure, some say it is too soon to celebrate the end of the mild downturn, and a spring bounce is not a measure of strength. If buyers want to get into the market before rates rise, won't that just steal demand from the future?

Mortgage rates have begun to inch higher as global bond yields climb. Canadian mortgage rates are typically priced off the government's five-year bond, which now yields 1.80 percent, up from a 60-year low of 1.076 percent in June last year.

But others believe the spring surge may reflect demand that was held back by the tighter rules, and the housing market's failure to really cool means a bubble is starting to inflate again. Official Canadian interest rates are not expected to rise until late 2014, so mortgage rates won't rise fast or furiously.

"A lot of forecasters like myself are expecting a relatively flat market, but there's a significant upside risk that if rates remain at current levels indefinitely, you're going to start to heat the housing market back up," said Craig Alexander, chief economist at Toronto-Dominion Bank, Canada's second-largest lender.